The most beautiful villages of France at our doorstep 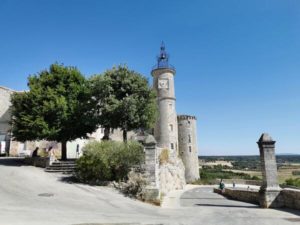 In the area surrounding the Domaine, there are many beautiful villages that we recommend you to visit. These beautiful places are mostly full of history. Among them, you will discover the village of Lussan.

This village, located only 10 minutes from the Domaine, has been named one of the most beautiful villages in France. Because of its position, overhanging the garrigue and offering you a magnificent view with an open panorama on the mounts of Ardèche, the Cevennes and the Mont Ventoux, but also because of its history.

Indeed, this village is a vestige of time, on the one hand thanks to its Romanesque chapel dating from the 12th century and on the other hand for its castle also dating from the 12th century and whose loopholes, the postern and the well are still standing today. The castle was then redeveloped in the 15th century with the construction of its 800 m long rampart encompassing the entire village.

If you liked this village, you will also like the one of La Roque sur Cèze and the one of Montclus which are also old medieval villages (in the Gard) classified among the most beautiful villages of France.